Washington D.C. — A Job Creators Network Foundation national survey found that members of the U.S. military and small business owners are viewed far more favorably than other segments of society.  Eighty-seven percent (87%) have a favorable opinion of military personnel and; 86% say the same of small business owners.

“When it comes to both favorability and trust, members of the military and small business are truly in a league of their own,” according to Scott Rasmussen, president of RMG Research. His firm conducted the survey of 1,200 Registered Voters. 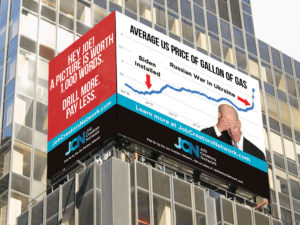 Washington, D.C. (March 17, 2022)—On Friday morning, the Job Creators Network (JCN) will erect a billboard in the heart of…