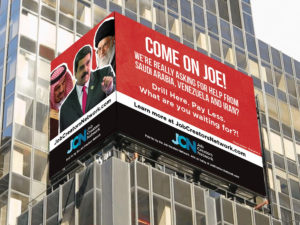 “Americans are seeing first-hand why energy independence is so important. Instead of ramping up American energy production, the Biden Administration is begging for help from countries that don’t share our values or goals. And in the case of Iran and Venezuela–have been openly hostile to the United States. Why would we depend on shady regimes around the world when we can tap American reserves? It’s clear that if we drill more, Americans will pay less and not be dependent on global bullies and thugs.”