JCN Highlights the Impact of Tax Cuts on Small Businesses

Alfredo Ortiz, JCN President and CEO, joined Buck Sexton on The Hill TV to discuss the Tax Cuts and Jobs Act. Read an excerpt below:

“In many cases, 50 cents of every dollar was being taxed, was being sent to Washington, D.C., to the government out of every single dollar earned,” Ortiz, who lobbied for the plan last year, said to Hill.TV host Buck Sexton on “Rising.”

“These are family businesses. We’re talking the dry cleaner, the pizza guy. These guys were working their buns off, quite frankly, 24 hours a day, seven days a week, trying to make things really work for themselves and everything that they put on the line, and 50 cents out of every dollar, in many cases, is going back to the government,” he continued.

“So they needed relief, and they hadn’t seen relief in 40 some odd years, so this tax bill, the Tax Cuts and Jobs Act that passed, was the biggest relief they had seen in about 41 years,” Ortiz said. 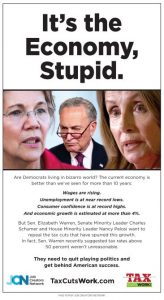 Today, the Job Creators Network (JCN) is running a full-page advertisement in USA Today highlighting how opposition to the…