Carlos is an entrepreneur and Hispanic minority leader in the hospitality industry. He is the President of Sergio’s Family Restaurants and creator of the franchise Sergio’s Fresh Cuban Cafe. Today, Sergio’s has over 500 employees and many locations throughout South Florida.

In 2012, Carlos created the La Flaca brand and a healthy menu for Latin food revolutionizing how people eat Latin and Cuban food in South Florida. The La Flaca brand has won many fans including brand sponsor athletes like Dannell Leyva, 2011 world champion on the parallel bars and bronze medal winner in the 2012 London Olympics, and Shawn Ramirez, winner of the 2014 Reebok Crossfit Games 40-44 Age Division “Fittest on Earth”.

Mr. Gazitua is Treasurer of the Florida Restaurant Lodging Association Board for Dade County and Recipient of Doral Chamber Council Hispanic Business Award. Prior to Sergio’s, Carlos earned his undergraduate degree from Georgetown University and his MBA and Law Degree from Stetson College of Law. 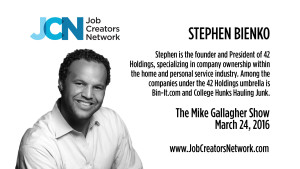 Stephen is a true job creator with his business, 42 Holdings, specializing in company ownership within the home and personal…