Op-EdAppeared in Array on October 5, 2018By Alfredo Ortiz

The September jobs report released today shows a continuation of the booming labor market, with the unemployment rate falling to the 50 year low of 3.7 percent. Average weekly wages rose at an impressive 3.4 percent over last year. These are the pocketbook issues that actually make a difference in the lives of voters.

If Republicans can make the case to voters that their policies are largely responsible for this increased pay and improved job prospects, they can maintain control of Congress on Election Day.

So far this year, the average number of jobs created each month is 16 percent higher than last year. This suggests that the tax cuts that took effect this year are boosting job opportunities. This is the sixth straight month the unemployment rate has been at or below 4 percent, also the best in a half century. Black and Hispanic unemployment rates continue to hover near record lows.

In addition to the unprecedented number of job opportunities, wages are rising at their fastest pace in a decade, rising about 50 percent faster than in President Obama’s second term. Just don’t expect the legacy media to move on from their “stagnating wages” talking point.

What makes this wage growth even more impressive is that it’s coincided with a significant influx of less-skilled workers into the job market. Since Election Day 2016, the unemployment rate has fallen by 20 percent and hundreds of thousands of prime-age people, who had quit looking for work altogether, have returned to the workforce to take advantage of this historic opportunity. Over the last couple of years, the labor market has grown far faster than the long-run trend would have suggested.

And this top-line wage growth figure only takes into account pre-tax wages. After-tax wages are growing even faster as tax cuts have reduced the amount of federal withholding taken from paychecks. Taxpayers are receiving higher net pay because of a doubled standard deduction, doubled child tax credit, and lower tax rates that took effect this year.

Exhibit A in how tax cuts are contributing to this historic labor market is the new 20 percent small business tax deduction. This is strengthening the small business backbone of the country by allowing them to protect one-fifth of their earnings from taxes and reinvest it in their businesses and employees.

Consider how countless small business owners across the country, including Joseph Semprevivo, owner of Joseph’s Lite Cookies in Florida, Guy Berkebile, a silicone producer in Somerset, Pennsylvania, and Dina Rubio, a restaurant owner in West Palm Beach, are using their tax cut savings to raise wages, hire, and expand.

No wonder business and consumer sentiment are at record highs.

September also marked the end of the third quarter. Economic growth for this period, which will be released next month, should be boosted by this wage and job growth. In the second quarter, the economy grew by over 4 percent. It is currently on track to grow by over 3 percent for the first time since 2005. Given these positive trends, some estimates suggest annual growth will be closer to 4 percent.

While the term economic growth gets thrown around a lot, it is the best way to measure standard of living improvements, especially for younger and low-income Americans who have been shut out of the 40 percentstock market surge since Election Day 2016.

Voters will face a big choice on Election Day next month: They can vote for Republicans who will build on this economic opportunity that is improving the lives of nearly all Americans. Or they can vote for Democrats who will raise taxes and throw sand in the gears of the roaring economy. The choice is clear. 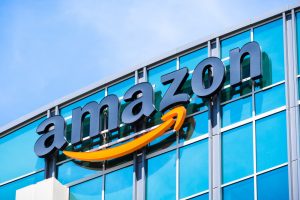 Amazon bowed to political pressure Tuesday and raised its minimum wage to $15 an hour for its 250,000 U.S.…