From Wal-Mart, to gas prices, to restaurants – good things happen when the markets are allowed to run with no outside interference.

That was the message from CKE Restaurants CEO and JCN member Andy Puzder in his latest appearance on Fox Business News and in a corresponding op-ed for the network.

Puzder said the recent drop in gas prices has freed up money for consumers to spend on other things, most notably, restaurants: 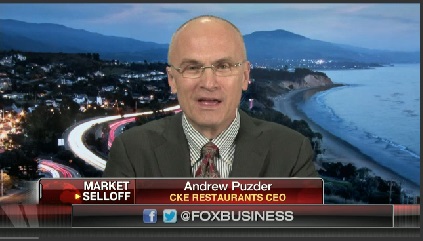 “Wal-Mart’s announcement demonstrates that economic growth is the most effective way to increase wages for American workers. Thanks, in great part, to the private sector’s innovative energy production techniques, the free enterprise system is beginning to once again function as it should. The retail sector in particular is seeing the potential for real and sustainable growth. Companies ranging from Starbucks to the Gap have announced starting pay increases similar to Wal-Mart’s. Economic growth creates an increase in the demand for labor. When the demand for something increases, so does the price; labor is no exception.”

To read Puzder’s op-ed in its entirety, click here.