Another Week, Another 2.5 Million in New Paperwork Hours

Another week, another $81 million in regulatory burdens from the federal government. And another 2.5 million in new paperwork hours. All for no reported benefits.

That’s according to the folks at American Action Forum (AAF) who keep track of federal regulatory activity.

Here are a few of the mind-numbing numbers decided by mostly un-elected government bureaucracies like the EPA and IRS:

“CMS’s (Centers for Medicare and Medicaid Services) 246-page final rule makes a number of amendments to Medicare and Medicaid by: 1) revising the outpatient prospective payment system, 2) updating hospital reporting, and 3) attempting to recoup overpayments from Medicare Advantage and Part D. The administration estimates a burden on hospitals of approximately $77 million, including more than 2.5 million paperwork burden hours.”

The AAF also compiled this chart to show which sectors have received the most regulatory action: 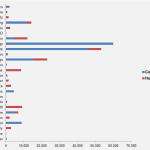 Read the rest of the article here.

Using monthly figures from the Bureau of Labor Statistics as well as the Economic Policy Institute, Job Creators Network compiles…