America is the most energy-efficient economy in history

On this Earth Day, economists show how far the United States has come in energy efficiency. As it turns out, we use less than half the energy we did in 1970 per dollar of output.
Blog PostApril 22, 2015

We will see a lot of news stories about this year’s observance of “Earth Day,” the environmental conservation campaign that has been at it since 1970.

Organizers say the 45th anniversary “could be the most exciting year in environmental history,” as “economic growth and sustainability join hands.”

There is some truth to this, at least in economic terms. According to the American Enterprise Institute (AEI), there is reason to celebrate this Earth Day that goes far beyond the headlines.

AEI economist Mark Perry writes that the U.S. economy was more than twice as energy efficient last year, than the first year of Earth Day in 1970. This makes America the most energy-efficient economy in history. In the chart below, Perry compares the amount of energy used with the amount of output (in dollars) concluding in short, that we use less than half the amount of energy today per dollar of output than we did 45 years ago. 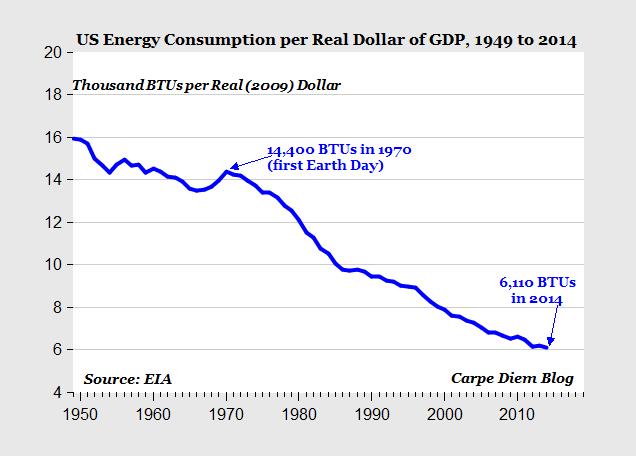 “Compared to 1970 when the first Earth Day was celebrated and 14,400 BTUs of energy were required for every dollar of output, the energy efficiency of the US economy has more than doubled – we use less than half that amount of energy today (6,110 BTUs) for every dollar of output (see chart).
Perry credits innovation, increased energy efficiency, and technological advances which allow the US to produce “ever-increasing amounts of real output with continually decreasing amounts of energy usage per dollar of real GDP.”

In 2013, the owner of eight Five Guys Burgers and Fries franchises suffered intense backlash for telling a…