Uber Tackles Government Regulation One City at a Time

The explosive growth of ride share company Uber demonstrates the power of the free market over the status quo of traditional taxi service, in spite of heavy-handed government regulations.
Blog PostOctober 2, 2014

Download the Uber app, plug in your credit card information and within minutes you can monitor your ride right to your location. You even know your driver’s name, what he or she looks like and what kind of vehicle will pick you up.

Welcome to the high-tech new kid on the transportation block.

No more waiting on the curb hoping an empty taxicab is less than ten minutes away. No more calculating tips, and no more fussing with cash – or credit card machines mounted to the back of the seat.

Uber’s new ride share model by which private car owners are summoned by app then cart people around for a fee is siphoning off business from traditional taxi services. So much business that cab companies, drivers and labor unions are joining forces and fighting hard to keep the taxi status quo. From Boston to Miami to San Francisco, existing cab companies are protesting in the streets and lobbying city leaders to keep Uber out, and as explained in DailySignal.com, they are using weighty government regulation to do it:

“In most cities in the U.S., the taxi industry is heavily regulated. Drivers must be specially trained, vehicles registered and paperwork filed and maintained. Licenses must be obtained and fees paid for individual drivers. Rather than fight these burdensome and costly compliance measures, the taxi industry fights to defend these requirements in its anti-rideshare struggle.”

Instead of scrutinizing market activity and finding ways to improve service to retain their revenue streams, traditional cab companies lean on government regulations to keep Uber out of their neighborhoods.  From Inc. magazine:

“Uber often meets legal complications–cease-and-desist orders, court injunctions, the impounding of cars. Uber is no stranger to complaints from public utilities commissions, from city councils, and from taxi and limousine commissions, all of which have constituents clamoring for protection from the likes of Uber.”

But as Inc points out, with $50 million in venture capital backing and a Google-like growth rate, Uber has heft of its own. Through social media campaigns, Uber has been fighting back and winning thanks in great part to the support of the consumers they serve and those who believe the pay-to-ride marketplace should include Uber:

“What we did in Chicago, what we do in all these cities, is reach out to all of our users and say, take action–email your councilperson; email the mayor,” (Uber CEO Travis) Kalanick says. “Uber riders are the most affluent, influential people in their cities. When we get to a critical mass, it becomes impossible to shut us down.”

Challenging the old, ineffective and expensive taxi business model to either improve their services and fairly compete with upstarts like Uber, or get out of the business altogether is the only way Americans will get the best value for their transportation dollar.

The Uber model demonstrates the very nature of the free market. When people want a ride and they will pay for it, they care only that the ride is affordable, clean and fast, not that their driver has a government permit. This model has also enabled Kalanick to quadruple the number of Uber employees – from 75 to 300 – in just one year, and nearly tripled the cities in which Uber operates.

Both sides should welcome consistent rules such as those that ensure passenger safety. But government involvement beyond that discourages future Uber-like entrepreneurs and in turn, job creation and consumer  choice. Free enterprise was built on the precept that when entrepreneurs and companies compete for our hard-earned money, we benefit from better quality products and services as well as lower prices. Any government regulation that favors one company and shuts another out of a market altogether drives a dagger into the very heart of free enterprise.

By holding government accountable for the rules it makes on behalf of only certain businesses and people, Uber is doing the right thing. 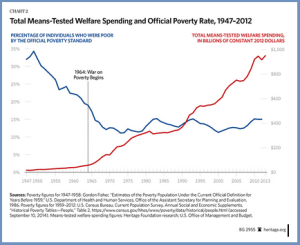 The “War on Poverty” Needs the Right Battles

A war cannot be won unless there are smaller victories along the way. The “War on Poverty” is no exception.…