The Campaign to Fix the Debt: Highlights of the President’s Budget Proposal

Now that we have more details about the President's proposed spending plan, here is a closer look at some of the plan highlights, courtesy of Fix the Debt.
Blog PostFebruary 3, 2015 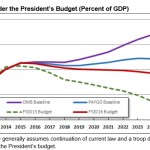 More details have come out about the President’s Budget Proposal for the upcoming fiscal year.

Here are some of the highlights as analyzed by The Campaign to Fix the Debt:

On February 2, 2015, the White House unveiled its federal budget request for Fiscal Year (FY) 2016. Below are some highlights of the proposal. Read a more in-depth analysis from the Committee for a Responsible Federal Budget here.

* Stabilizes debt, but at a very high level. According to the White House’s own projections, debt held by the public will fall slightly from 74 percent of the economy (as measured by GDP) today to 73 percent in 2025. This means that debt will remain at record high levels previously seen only during World War II. In dollar terms, debt will rise from about $13 trillion today to over $20 trillion by 2025.

* Pays for new initiatives. The budget proposes a number of ambitious new tax breaks and spending programs on everything from an expanded earned income tax credit to universal preschool to free community college. Commendably, however, the President proposed spending reductions and new revenues to pay for all new costs, and actually reduces deficits by over $900 billion over the next decade.

* Reduces Medicare costs, but leaves extensive entitlement spending growth. The President’s budget calls for nearly $300 billion of health savings (after factoring in a “doc fix” for Medicare physician payments) from delivery system reforms, reductions in prescription drug costs, lower payments to providers, higher Medicare premiums for wealthy seniors, and other changes. Despite this, Medicare and Medicaid costs will still grow by about 75 percent over the next decade. Social Security costs, which are barely addressed at all in the President’s budget, will rise similarly.

* Replaces sequester and funds infrastructure. The President’s budget would reduce the bulk of the automatic cuts from “sequestration” in 2016, and a significant but declining share of those cuts thereafter. It would also fully fund and increase highway spending. Sequester relief would be paid for with a variety of spending cuts and tax loophole closures, while highway spending would come from one-time transition revenue raised from multinational corporations during tax reform.

* Calls for business tax reform. The President’s budget calls for pro-growth business tax reform which would reduce business tax breaks in order to lower the corporate tax rate to 28 percent. On the international side, it calls for replacing current rules with a 19 percent global minimum tax on foreign-earned income, while imposing a one-time 14 percent transition tax on past untaxed foreign income to fund transportation spending.

* Misses an opportunity to encourage action. The President has an enormous bully pulpit to inform the country about the budget challenges ahead and to foster bipartisan action in Congress. Acting sooner rather than later will make the required changes less severe.