For many years, the giant discount retailer has been the target of unions and liberal activists who have harshly criticized the company’s health care plans, calling them “notorious for failing to provide health benefits” and “substandard.”

But a Washington Examiner comparison of the two health insurance programs found that Walmart’s plan is more affordable and provides significantly better access to high-quality medical care than Obamacare. 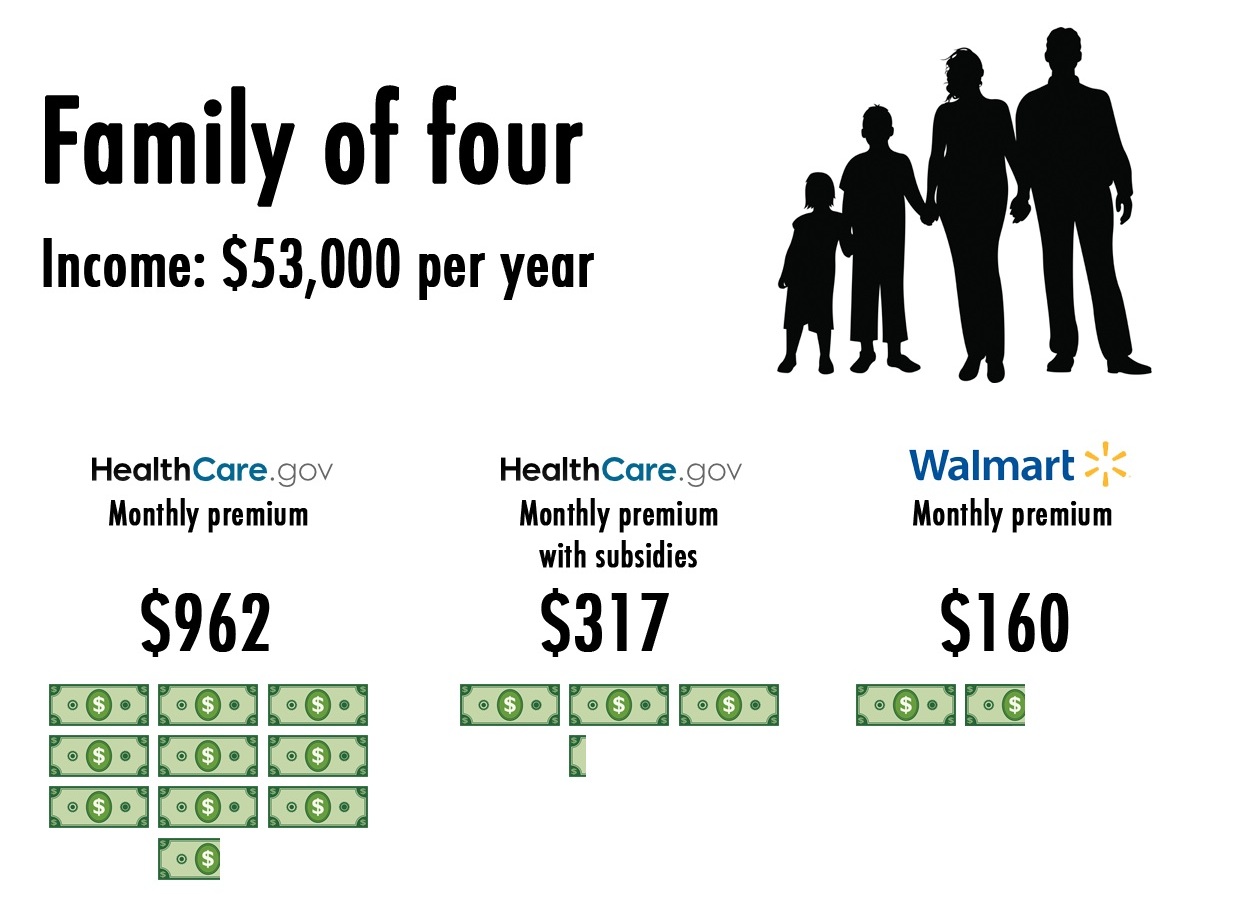 Independent insurance agents affiliated with the National Association of Health Underwriters and health policy experts compared the two at the request of the Examiner.

Walmart furnished employee benefit information to the Examiner. Neither Obamacare advocate Families USA nor the United Food and Commercial Workers, which backs anti-Walmart campaigns, responded to Examiner requests for comment.

Also offered is a Health Savings Account plan that includes high deductibles but allows tax-free dollars to be used for coverage.

For a monthly premium as low as roughly $40, an individual who is a Walmart HRA plan enrollee can obtain full-service coverage through a Blue Cross Blue Shield preferred provider organization. A family can get coverage for about $160 per month.

Unlike Obamacare, there are no income eligibility requirements. Age and gender do not alter premium rates. The company plan is the same for all of Walmart’s 1.1 million enrolled employees and their dependents, from its cashiers to its CEO.

A Journal of the American Medical Association analysis from September showed that unsubsidized Obamacare enrollees will face monthly premiums that are five to nine times higher than Walmart premiums.

JAMA found the unsubsidized premium for a nonsmoking gouple age 60 can cost $1,365 per month versus the Walmart cost of about $134 for the same couple.

The medical journal reported a 30-year-old smoker would pay up to $428 per month, in contrast to roughly $70 each month for a Walmart employee.

A family of four could pay a $962 premium, but the same Walmart family member would pay about $160.

Low premiums are not the only distinguishing feature of the Walmart plan. The retailer’s employees can use eight of the country’s most prestigious medical facilities, including the Mayo Clinic, Pennsylvania’s Geisinger Medical Center and the Cleveland Clinic.

At these institutions, which Walmart calls “Centers of Excellence,” Walmart employees and their dependents can get free heart or spinal surgery. They can also get free knee and hip replacements at four hospitals nationwide.

Many top-rated Walmart hospitals — such as the Mayo and Cleveland clinics — are left out of most Obamacare exchange plans.

But the real difference between Obamacare and Walmart can be seen in the levels of day-to-day access to doctors and hospitals.

Robert Slayton, a practicing Chicago independent insurance agent for 11 years and the former president of the Illinois State Association of Health Underwriters, described to the Examiner the differences between Walmart and Obamacare provider networks.

Slayton said the BlueChoice exchange network for President Obama’s hometown has very limited hospital participation. “In downtown Chicago, the key is the number of hospitals: 28,” he said.

“Now we’re going to the national network — this is what the Walmart network would most likely be — and you have 54 hospitals. That’s a big difference,” he said.

“It’s not just the number, but who they are. You’ll find under the Obamacare exchanges that the academic hospitals have declined to participate, along with the specialists who practice at those hospitals. The same is true of cancer hospitals,” she said.

“People who are seriously ill need to stay away from these exchange plans,” McCaughey said.

Slayton said the gap between doctor availability in Chicago under the Obamacare and Walmart plans is dramatic.

“You will notice there are 9,837 doctors [under Obamacare]. But the larger network is 24,904 doctors. Huge, huge difference,” he said.

Walmart also offers a free preventive health plan that mirrors the Obamacare plan. Its employees can take advantage of a wide range of free exams and counseling, including screenings for colorectal cancer, cervical cancer, chlamydia, diabetes, depression and special counseling for diet and obesity.

Their children can get more than 20 free preventive services, ranging including screenings for genetic disorders, autism and developmental problems to obesity, lead poisoning exposure and tuberculosis. There are also 12 free vaccinations, and free hearing and vision testing.

Walmart employees pay as little as $4 for a 30-day supply of generic drugs and only $10 for eye exams through a separate vision plan.

“It’s a lot better program than people, I think, might assume without looking, just because Walmart has gotten such a bad reputation by some of the labor groups and other groups for its general activities,” said Gail Wilensky after reviewing the retailer’s plan.

Wilensky was head under President George H.W. Bush of the federal Health Care Financing Administration, the predecessor to the the Centers for Medicare and Medicaid Services. CMS is the agency in charge of implementing a large part of the Affordable Care Act, and it oversaw the rollout of the troubled healthcare.gov website.

David Todd, an independent insurance agent based in Little Rock, Ark., also compared the health plans for the Examiner. Walmart’s corporate headquarters is in Bentonville, Ark., and the company has 58,000 workers in the state.

Todd pointed to stark differences between the government plan and Walmart: “If I buy a family plan on the exchange, it’s still $1,000 a month. And I can buy this for … [$160] on Walmart.”

Walmart also gives cash to its employees for any health care expense. The annual payments run from $250 to $1,000 and are given at the beginning of the enrollment year in an account that can only be used for health care expenses.

Todd looked at a 30-year-old woman who could qualify for the government subsidy. “The nonsubsidized premium is $205 a month for this 30-year-old. If they get a subsidy, then the premium is zero. But that person has to come up with $6,300 if something catastrophic happened,” he said.

Todd said some Obamacare exchange family plan deductibles can go as high as $12,000 before benefits kick in.