Intrusion on small businesses by unelected bureaucrats and special interests makes the cost of business rise and workers more expensive which means there may be fewer of them.
Blog PostDecember 4, 2014

There’s a new target today in the “Fight for 15.” Today’s union-backed disruptions at businesses in 190 cities nationwide have added convenience stores to its “Strike Fast Food” list. It started in 2012 with fast food restaurants and has since grown to include home health care aides, federal contract and airport workers and now as the Washington Post reports, “at BP, Shell, Speedway, Family Dollar, Dollar Tree, Dollar General, Marathon, Sonoco, and more — nearly every truly low-wage job in America is represented.”

According to the Strike Fast Food people, They’re “all outraged because the big companies we work for reap record profits and still refuse to pay us enough to live.” 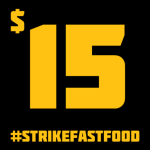 Sheer numbers belie this claim. Just 11.3 percent of America’s minimum wage workforce live in households the government considers “poor.” And only 1.1 percent of the nation’s workforce is made up of employees who actually make the federal minimum wage of $7.25. Many cities and states have higher minimum wages on the books and local franchise owners typically pay local market value for their workers.

But a big hike in wages would be more lucrative to unions. And that’s where the National Labor Relations Board comes in.

Fast food restaurants and similarly franchised businesses have long been a frustration for Big Labor. Organizing millions of workers who work for hundreds of thousands of owners is difficult and expensive especially when many employ part-time workers with high turnover rates.

The NLRB could completely erase these union frustrations. The board’s General Counsel has recommended big companies be considered “joint employers” with individual franchisees. The idea is purportedly to make the corporate “parent” responsible for complaints against individually owned businesses carrying the corporate brand. However, it really means an end to the union roadblocks. For example, McDonald’s USA would be considered the single employer of the nation’s 860,000 McDonald’s workers. A Big Labor feast, especially if combined with a successful $15 wage war.

The ruling has the potential to upend more than 50 years of successful franchise history that has created more than 750,000 businesses in America, and 18 million jobs. Local owners could lose their ability to negotiate their own workers’ wages, benefits and hours to unions. Franchisors would be forced to tighten the reins on their franchisees. Employees who likely would not have voted to unionize would still see dues skimmed from their paychecks. And aspiring entrepreneurs would be less inclined to take their chances on a franchise if they face less control over operations.

And then there’s overtime. Another rule is expected in February that would force employers to pay more overtime by raising the minimum salary threshold for workers currently exempt from overtime rules. Right now, employers can opt not to pay overtime to any worker who makes more than $23,000. The President wants to use his executive authority to change the rule under the Fair Labor Standards act and raise that minimum, but has not yet said by how much. There is also speculation the rule would narrow the definition of “manager” – a title also included in the so-called “white collar exemption” of overtime.

According to the Washington Examiner, if the wage threshold were doubled to around $50,000, 3.5 million or about 7 percent of the nation’s estimated 53 million salaried workers would be affected.

Pushing the threshold too high could actually hurt employees with employers forced to limit overtime hours altogether or rein in perks like comp or flex time.

JCN CEOs In the News: Franchisees and the Minimum Wage