Priceless? Or Penniless in Seattle

Government policies are driving up the prices you and I pay for goods and services that we sometimes cannot avoid.

Back in March, we brought you the story of a popular Los Angeles eatery that has added a one percent surcharge on to every tab to help pay for mandated health care as per Affordable Care Act.

A Washington-based watchdog group came across this parking receipt from MasterPark, the valet parking service for Seattle’s SeaTac airport. Notice that in addition to a city tax, an airport “access fee” and a sales tax, there is also “Living Wage Surcharge” of $6.93 – 99 cents per day, or on this bill, about seven and a half percent more out of the customer’s pocket: 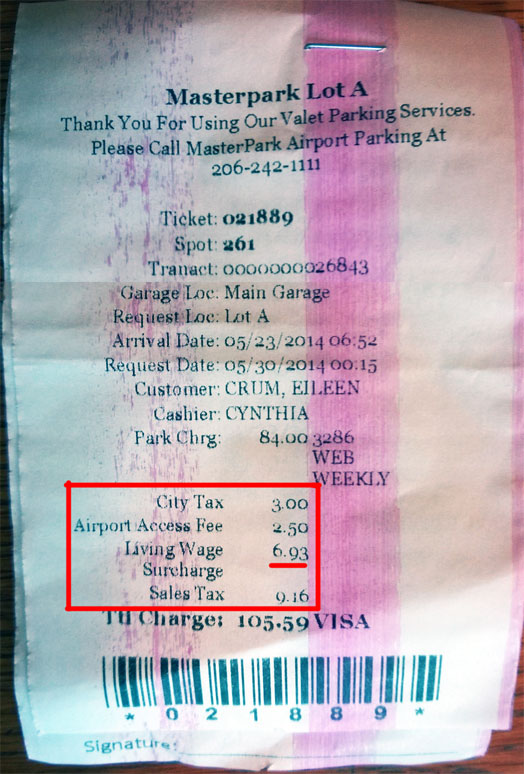 The watchdog group checked into it, and sure enough, verified that the additional charge is due to the higher minimum wage:

“Northwest Watchdog called Masterpark to verify the authenticity of the receipt. Kevin, the attendant on duty Wednesday afternoon, confirmed the charge is real. To deal with the higher wage, enacted on Jan. 1, Masterpark is charging customers an additional 99 cents per parking day, a surcharge that comes on top of all other taxes and fees.” (read more here)

And according to news reports. supporters of the $15 minimum wage are looking to spread the wealth to other Washington cities, or perhaps even go state-wide.

If that happens, prices will go up on more than just airport parking. Small businesses all over the country operate on razor thin profit margins – a few cents on the dollar at fast food restaurants, where more than a third of costs are wages. Grocery stores, which tend to employ more lower wage workers, earn just one penny profit per dollar.

For businesses that cannot simply add 99 cent surcharges onto their prices, the only other choice is to cut jobs.

The government even admits job losses will result from massive hikes in the minimum wage. The Congressional Budget Office says raising the minimum wage to even $10.10 an hour would eventually leave as many as 500 thousand people unemployed.

A half million people. Considering more than half of minimum wage workers are younger than 24, we are looking at a brand new crop of employes who just want to start their adult working lives, but will have a much more difficult time doing so.

Whether the Affordable Care Act or forced minimum wage increases, these government policies stifle  economic freedom and ultimately impact Americans where we can least afford it – our paychecks and pocketbooks.