The billboard features an image of Biden fumbling with a mask. The billboard’s headline reads, “HEY JOE, EVEN YOUR HOME STATE IS DITCHING THE MASK REQUIREMNETS.”  And it concludes, “Isn’t it time you do the same?!”

The ad directs onlookers to AxeTheMask.com. 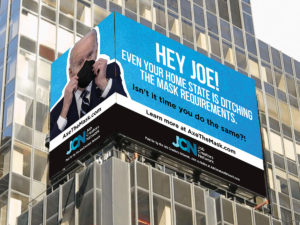 “Blue States, including Joe Biden’s home state of Delaware, are ditching mask mandates because the American people are tired of them.  The American people are hungering to go back to normal.  And yet, Biden is holding out, keeping all the federal mask mandates.  That’s unnecessary and ridiculous.  The sooner we can get back to normal, the sooner our economy can begin recovering from Biden’s low growth and stagflation. We’re calling out Biden publicly in the heart of Times Square.  This isn’t a conservative issue or a liberal issue, it’s a common-sense issue – but one that’s key for our recovery.”