New NYC Billboard: AOC Thinks She’s the Boss, But the American People Are

New billboard in Times Square spotlights how the Green Raw Deal puts government in the driver’s seat, not the American people
Press ReleaseMarch 5, 2019

Washington, D.C. (March 5, 2019)—Today, the Job Creators Network is erecting a new billboard in New York City calling attention to the massive expansion of government powers that would be necessary to implement Rep. Alexandria Ocasio-Cortez’s Green New Deal—a continuation of a series of billboards highlighting the consequences of socialist policies.

The new billboards read “Hey AOC, you’re the ‘boss’?” and “WE DON’T THINK SO. The American PEOPLE are the boss.” View the billboards here and here. The advertisement then encourages viewers to visit TheGreenRawDeal.com.

“The harms of socialism are rooted in the expansion of government power,” said Alfredo Ortiz, JCN President and CEO. “And when government is in the driver’s seat, the American people are the ones to suffer. As we’ve highlighted many times before: socialism takes and capitalism creates.”

View the billboards below: 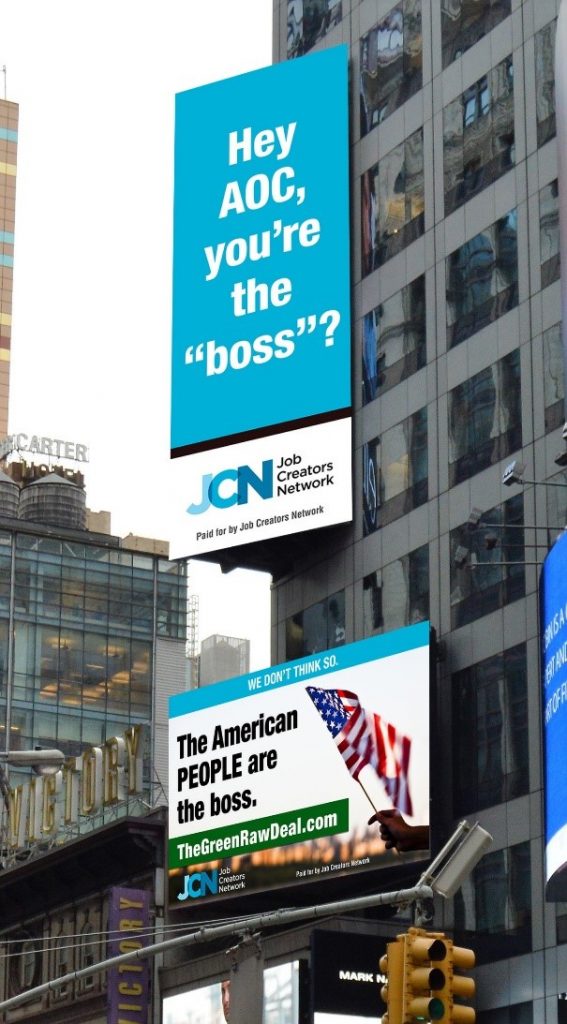 Weekly Pulse Polling: Americans Have Very Little Idea of the Hidden Taxes They Pay on a Daily Basis

Washington, DC (February 28, 2019) – As Americans are filling out their state and federal income taxes, they are…