New Billboard in Times Square: THANKS FOR NOTHING AOC!

Washington, D.C. (February 20, 2019)—Today, the Job Creators Network is putting up a billboard in Times Square calling out Rep. Alexandria Ocasio-Cortez for the role she played in the recent termination of Amazon’s HQ2 that was planned to be constructed in Queens. The pullout of Amazon—because of anti-business politicians, notably Ocasio-Cortez—is a major blow to the New York economy. The retreat will not only cost the area $12 billion in economic activity, but 25,000 new jobs that would have paid an average salary of $150,000.

“The Amazon pullout is a perfect example of what we’ve been saying: socialism takes and capitalism creates,” said Alfredo Ortiz, JCN President and CEO. “The economic consequences of Amazon’s pullout is just a small taste of the harm that is to come if Ocasio-Cortez’s anti-business canon comes to fruition and is made federal policy.”

The billboard—which is located on 42nd Street near 8th Avenue—will be displayed for one week beginning today and is headlined “AMAZON PULLOUT, Thanks For Nothing AOC.” The ad goes on to highlight the economic consequences of Ocasio-Cortez’s actions and ends with the hashtag, #SocialismTakesCapitalismCreates.

View the billboard below: 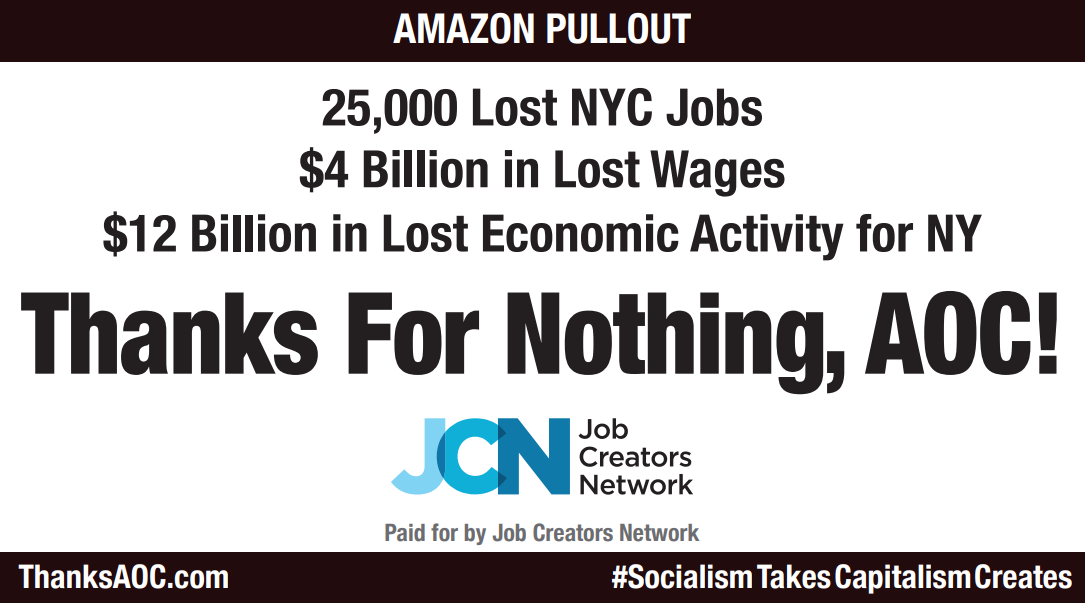 Weekly Pulse Polling: At Least 50% of Americans Rate the US Economy as Either Good or Excellent

Washington, DC (February 14, 2019) – Prior to the shutdown in December, data from the Job Creators Network/ScottRasmussen.com Weekly…