Washington, D.C. (January 14, 2022)—On Thursday, the U.S. Supreme Court dealt the Biden administration a huge blow by blocking their signature vaccine mandate. The Job Creators Network (JCN) was the first business group to challenge the overreach of executive power in court. In response to the win for small businesses, JCN erected a billboard in the heart of Times Square criticizing the Biden administration for proposing and trying to implement the rule.

The billboard reads, “Hey Joe, We Told You To Let the Mandate Go. YOU LOST. AMERICA WON!” The ad continues, “You Need To Think Twice When Declaring War on Small Business!” View the billboard here. 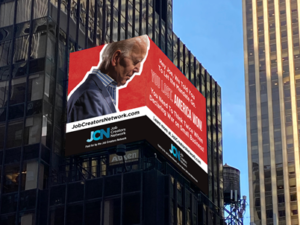 “The Supreme Court decision striking down Biden’s illegal vaccine mandate is a huge victory for Main Street. The OSHA rule threatened to trigger a mass exodus of workers from small businesses that are already facing crippling labor shortages and record inflation. The White House continues to propose job killing policies that will have an outsized negative impact on entrepreneurs, but this court victory proves we can effectively fight back and win. JCN will continue to go to the mat for Main Street.”

JCN also published an op-ed this morning in Fox Business reacting to the Supreme Court decision. Read the piece here.

Today, the Supreme Court issued a stay of the Biden Administration’s employer vaccine mandate in response to a challenge brought…