Washington, D.C. (April 11, 2019)—On Wednesday, Sen. Bernie Sanders introduced new Medicare for All legislation that would largely eliminate private health insurance. In response, the Job Creators Network (JCN) is ran a full-page advertisement in The Hill on Thursday highlighting the consequences of a government run health care system, as well as poking fun at Sen. Sanders for attempting to move to the left of Rep. Alexandria Ocasio-Cortez in order to pad his run for the White House.

“Medicare for All is a lose-lose policy,” said JCN President and CEO, Alfredo Ortiz. “Not only will it dismantle millions of private health plans, but the new system will mean massive tax hikes, longer wait times and will jeopardize the health benefits of millions of seniors who already receive coverage under the current Medicare system. Our elected officials should think twice before supporting such a massive power grab that will harm so many Americans.”

The advertisement is titled “Hey Bernie…Are you just trying to out-left AOC and your White House competition?” and drives viewers to the new website, MediScareForAll.com. The ad goes on to say “Or do you actually believe that it’s a good thing to disrupt the lives of over 200 million Americans whose health insurance is better than any government run healthcare system?”

View the full-page advertisement below: 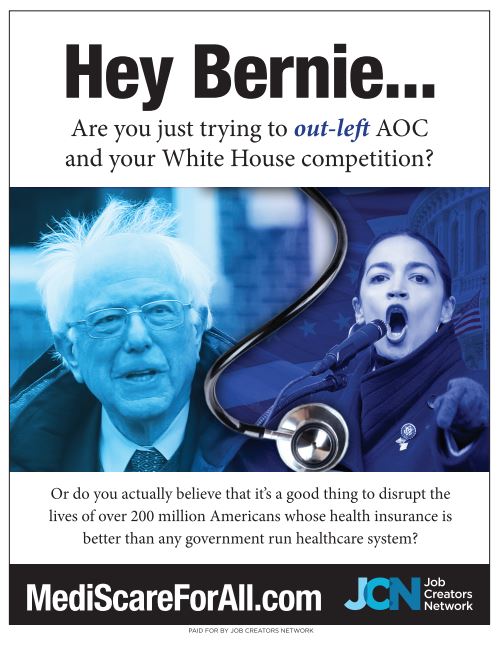 In addition to the ad, JCN has also distributed a letter to members of Congress urging them to publicly reject the Medicare for All proposal because it will deeply harm small businesses. Read a copy of the letter here.