Billboard: It’s time to Rock The Woke and Tell Disney “No Mouse In My House” 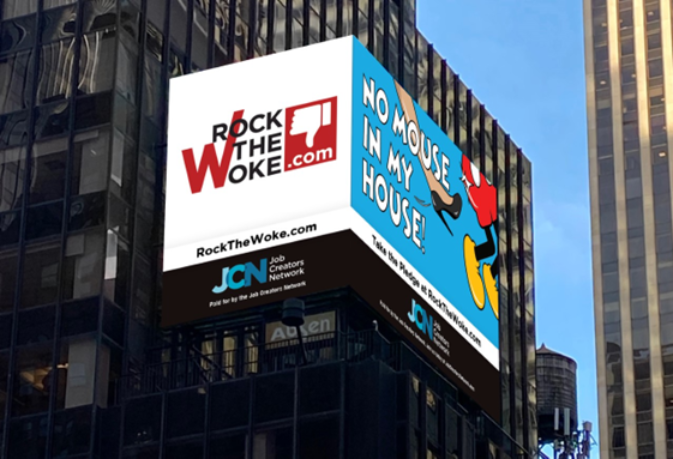 The Job Creators Network (JCN) erected a billboard in the heart of Times Square highlighting its “No Mouse in My House” pledge as part of its Rock The Woke campaign. Rock the Woke is drawing attention to egregious examples of “wokeness” hijacking free-market capitalism and pressuring companies to focus on providing products and services that consumers want—not on being culture warriors.  To learn more, go to RockTheWoke.com.

The billboard features an image of a woman’s shoe kicking a mouse in the backside. The pledge encourages people to boycott Disney until they abandon their political activism that has nothing to do with entertaining children and families.

“It has become all too common for companies like Disney to get involved in political and cultural debates that have little to do with their business model in an effort to appeal to the latest push from liberal politicians and activist groups. These decisions have nothing to do with the companies or their profitability and serve to divide rather than unite. We need to actively put pressure on them, and that means getting Americans involved. Rock the Woke is just that, a cultural effort to shame corporations who are going woke. Through radio ads, social media efforts, billboards, and even potential legal action, our goal is to course-correct these corporations.”

Washington, DC (June 15, 2022)— Today, the construction and mining equipment giant Caterpillar announced that it will relocate its global headquarters…