A new poll shows half of Americans recognize the problem of government overreach and support for such regulation is dwindling.
Blog PostSeptember 25, 2015 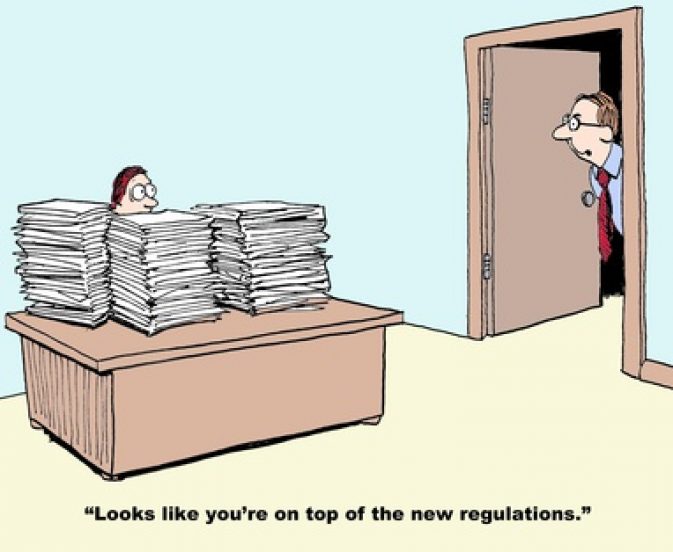 How much is too much government regulation?

Consider the regulatory regime in our nation right now. Federal regulations cost $1.88 trillion annually – more than the entire economic output of Canada. These include a lot of new government rules in the federal health law, in Dodd-Frank, and from unelected bureaucracies such as the Environmental Protection Agency.

That $1.88 trillion per year in regulations is felt in lost economic productivity and higher prices each year. That’s  $14,976 per household – more than the average family spends on health care, food and transportation. 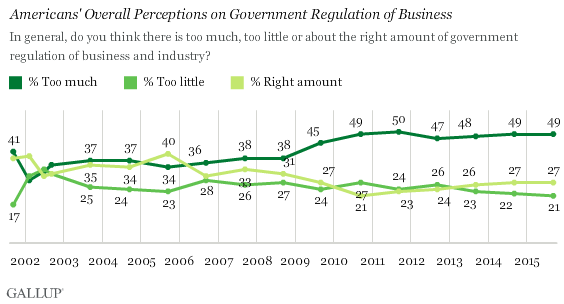 A 2013 survey by the ADP Research Institute found more than one-third of mid-sized businesses (with 50-999 employees) were fined or penalized for non-compliance to government rules. In fact, 58 percent of those fined did not know how much the fines would cost and 47 percent didn’t know how often they were fined, even though more than eight in ten employers were confident they were complying with business regulations.

With more regulations forthcoming from the EPA such as the Clean Power Plan and Clean Water Rule along with more provisions of both Dodd-Frank and the Affordable Care Act, businesses face even greater compliance costs – in both time and money.

There are several mechanisms that could help loosen the stranglehold of government overreach, including the Congressional Review Act and sunset legislation. Lawmakers are also considering the Regulatory Accountability Act of 2015 – a bill that would would force cost-benefit analyses of any rules that would have an annual economic impact of more than $1 billion. According to the Hill, agencies would also be required to adopt the least costly approach, conduct administrative hearings on the most costly regulations and more rigorous rules testing upon court challenges.

This Gallup poll adds to the evidence that more than just business owners understand the problem of too much government overreach. When half of Americans recognize that federal rules continue to chip away at the economic freedom that made our nation great, policymakers should take note – they are on notice.

Carlos Gazitua, CEO of the Sergio’s chain of Cuban restaurants, looks to Hispanics as the “x-factor” that will drive…