Array
Op-EdAppeared in Array on July 25, 2019By Alfredo Ortiz

In order to protect President Trump’s economic boom, help small businesses and improve the country’s fiscal situation, the Federal Reserve should cut interest rates at its meeting this week.

Cutting interest rates would correct the Fed’s disastrous December rate increase, which I warned against, and which the Fed essentially admitted was a mistake soon after in order to calm markets.

Low interest rates provide the best opportunity to extend the roaring economy that is bringing prosperity, opportunity and higher standards of living to the overwhelming majority of Americans. Wage and economic growth, on which ordinary Americans depend, have been pivoting around 3 percent for the last couple of years, about 50 percent faster than under President Obama.

Today’s booming economy, and corresponding historically low unemployment, are largely thanks to Republican pro-growth policies like tax cuts and deregulation that allow small businesses to invest, expand and hire.

Rising interest rates threaten this prosperity because they make these stimulative actions more expensive. High interest rates act as a tax on the economy, making the loans necessary to start a new business, open a new product line or expand into new markets more costly. They limit the access to credit that is the lifeblood of the small business economy.

No wonder the vast majority of small-business owners I talk to identify rising interest rates as one of their highest hurdles to continued prosperity. President Trump was correct when he said that the Fed poses the “biggest threat” to the economy.

Another — often overlooked — reason why low interest rates are important is because they help mitigate the negative impacts of the growing debt and deficit. The Treasury already pays out about $500 billion in interest alone on the national debt per year. The Congressional Budget Office estimates that interest payments will exceed defense and non-defense spending within the next several years.

Of course, the biggest threat to national solvency is the Democrats’ crazed socialist policy agenda. Policies such as Medicare for All or the Green New Deal would double or triple the national debt over several years. The Mercatus Center estimates that Medicare for All would cost $32 trillion over 10 years — something that not even the doubling of tax rates could cover. The American Action Forum estimates that the Green New Deal would cost $51 trillion over ten years at a minimum.

While spending cuts are necessary to get the country’s fiscal house in order, the only long-term solution to the debt problem is for the country to grow its way out of it. For instance, the Committee for a Responsible Federal Budget estimates that “for growth alone to solve the debt, the country would need sustained annual productivity growth between 2.5 and 4 percent.” This is difficult, though not impossible under pro-growth public policy.

Of course, this Fed rate cut calculus wouldn’t be so straightforward if inflation were higher. Small businesses hate significant inflation almost as much as high interest rates, so it’s important to keep it under check. But inflation has been low for a long time.

The Fed’s favored core inflation metric has remained below its 2 percent target for many years now. And many experts argue that the inflation figure is actually overstated because it doesn’t count many technological improvements that often come at no cost at all.

An aggressive Fed could undermine the economic success that Americans of all backgrounds are currently enjoying. The Fed also poses the second biggest threat to national solvency after Congressional Democrats. To build on President Trump’s economic boom, which is our only chance to fix the debt, the Fed should listen this time and lower interest rates this week. 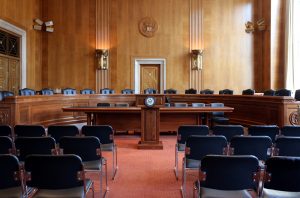 The Other Congressional Testimony This Week: Preventing the Biggest Tax Hike You’ve Never Heard Of

While the nation focuses its attention this week on Special Counsel Robert Mueller’s testimony and its aftermath, there’s another testimony…