AOC and NYC billboard economics lesson: What she still doesn’t get

Op-EdAppeared in Fox Business on February 25, 2019By Alfredo Ortiz 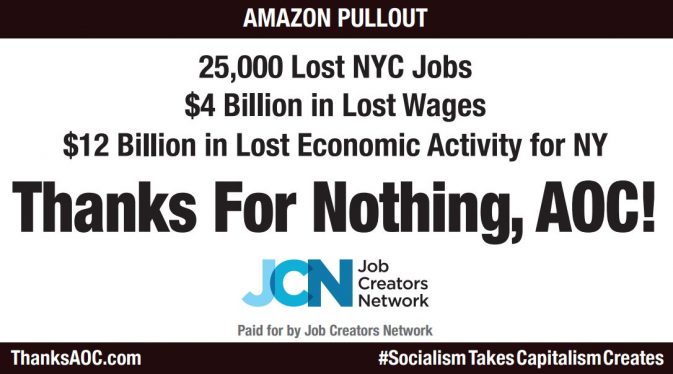 Bizarrely, AOC responded to our billboard that highlighted her anti-worker crusade by claiming it proved her success fighting “anti-worker policies.”

Few things effectively communicate the power we’ve built in fighting dark money & anti-worker policies like billionaire-funded groups blowing tons of cash on wack billboards (this one is funded by the Mercers).

AOC’s chief complaint was that Amazon would have received $3 billion in state and local tax Opens a New Window. offsets in return for choosing New York City. She claimed that New York would receive “less” tax revenue from the deal. This demonstrates she either didn’t understand or purposely mischaracterized the agreement. The $3 billion would have been in return for $30 billion in new tax revenue — a 10 percent discount. Taxpayers would have still come out some $27 billion ahead.

This episode illustrates just how out of touch AOC and other lawmakers on the far left are with the needs of ordinary Americans, who want jobs Opens a New Window. and opportunity. AOC is learning the hard way that there is no income to redistribute without businesses and the jobs they create. Government doesn’t produce, but only can spend the money created by others. Capitalism creates and socialism takes.

The people hurt most by this socialist agenda are ordinary Americans who lose out on job opportunities needed to better their lives. AOC’s policies threaten the booming economy, driven by Republican tax cuts Opens a New Window. and deregulations, that’s providing the most opportunity in a generation. Unemployment rates — including those among youth, minorities, and women — are hovering near record lows. According to The Kauffman Foundation, entrepreneurship is at a 20-year high, led by gains by Hispanic and other immigrant business owners.

The American free market system allows ordinary people to succeed like nowhere else. Contrary to the popular narrative about “stagnant incomes,” a Congressional Budget Office analysis finds that the bottom quintile of earners saw their incomes rise by one-third between 2000 and 2015, more than twice as fast as any other income group.

I can speak to these opportunities from personal experience. I was brought up by a single, immigrant mother who worked as a housekeeper in San Diego. I worked hard — my mom and I used to collect cans for grocery money. What allowed me to succeed was the free enterprise system and the opportunities it created. In no other country could I have become a successful business leader in corporate America — and a small business owner.

“Every billionaire is a policy failure” is the Twitter handle of an AOC staffer. Yet, let’s just look at one example. Bernie Marcus, co-founder of my organization, made his money by revolutionizing home improvement and creating 400,000 good paying jobs out of nothing by co-founding The Home Depot.

Is he really a failure? The Home Depot’s many workers and customers would disagree.

Democrats are going full class warfare, bashing the rich for not paying their fair share of taxes, rigging the economy,…