We often talk about victims of a forced minimum wage hikes being young, lower-skilled, less educated and at the first rung of the employment ladder.

But with government mandated minimum wage increases taking effect in certain cities, states and for federal workers, we are starting to see new groups of victims emerge. Groups that perhaps elicit even more sympathy than the young, eager employee working his way through high school or her way through that college degree. 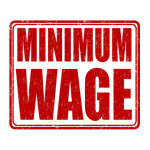 The Wall Street Journal recently profiled a unique restaurant in a small Michigan town called Tastes of Life. This eatery operated as a non-profit, and a “next step” to people who had “bottomed out” in life. Working at “Tastes of Life” gave recovering addicts, formerly incarcerated people and others with few chances at employment a chance to “focus on practical skills, like building a budget, finding a job and keeping a daily routine.”

As a non-profit, faith-based endeavor, the popular eatery had already been running on lean resources and rising food costs, with the restaurant owner subsidizing losses. When Michigan lawmakers raised the minimum wage last year from $7.40 to $8.15 an hour, the owner, unable to absorb the additional cost, shut the doors in late September:

“Handling this one-two punch of new costs presented Mr. Mosley with conflicting goals: raising prices and boosting customer traffic. “If we had a $10 menu item, it would have to be $14,” Mr. Mosley said. The restaurant’s customer base of seniors on a fixed income and Hillsdale locals made this option a non starter. The restaurant also had to find roughly 250 new customers a month, unrealistic in a small town of about 8,300.”

Then there are the disabled. According to a piece in Bloomberg, thousands of disabled adults earn sub-minimum wage and have done so under cover of the 1938 Fair Labor Standards Act.

But on Jan. 1, the minimum wage for federal contractors went up to $10.10. This impacts hundreds of non-profit contractors that provide jobs to adults with disabilities. While some of these workers will get a raise, others may be out of a job as their employers “make hard choices about who they can afford to keep on the payroll”:

“People who have the most severe and multiple disabilities are the ones who will lose work opportunities,” said Jim Gibbons, president and chief executive officer at Goodwill Industries International Inc. in Rockville, Maryland. “That’s the tragedy of the conversation.”

Like the restaurant in Michigan, these federally contracted companies will have to pay their workers more, without seeing a raise in contract revenue. Paul Atkinson, who runs a U.S. military laundry service has begun that tough decision-making process:

“We’ve already started looking at people who’ve maybe been working in our laundry for 20 years,” Atkinson said. “Will everybody still get the kind of hours and setting they have now? No. Will people be harmed by this? Yes.”

The bottom line is that when government tells employers to pay their workers more with the same amount of money coming in the door, they need to decide which employees will give them the best value for their dollars.

And you can add the disabled and those rebuilding their lives to the growing list of workers who will likely see these “first chance” opportunities disappear.

How you and I lowered gas prices

You know the incredible drop we’re seeing at the gas pumps? You and I are responsible for it. Not government.…