In Small Business We Trust

American's trust small businesses more than any other group. Government should do the same.
Blog PostOctober 22, 2014

The polling firm Gallup recently reported that Americans’ approval of Congress is a mere 14 percent. This is exactly where it has been stuck most of this year. Gallup also says this is one of the lowest measured approval rating in the fall before a midterm election since 1974.

This number may not be all that surprising, when you consider Congress is one of the least trusted groups in America. A study conducted by Pew Research Center found 24 percent of Americans trust Congress. And how much approval would someone give an entity they distrust?

So if so few Americans trust Congress, who do they trust?

According to the same poll, 71 percent of Americans trust small businesses, making this group the most trusted: 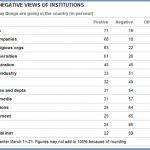 Government figures show small businesses represent 99.7 percent of U.S.employer firms, and are responsible for 64 percent of net new private-sector jobs. They also employ 500 or fewer employees, making it more likely you and I know them personally, and maybe even know the owners. Perhaps it is this pervasiveness in our everyday lives that leads to this level of American trust in small businesses.

On the flip side, perhaps this loyalty is why 69 percent of Americans also say the most trusted group is also the group most neglected by government.

That is likely an easy conclusion to reach, considering a very troubling trend of wrong way “business dynamism.” The Brookings Institution describes business dynamism as “the process by which firms continually are born, fail, expand and contract, as some jobs are created, others are destroyed and others still are turned over” and that “Entrepreneurs play a critical role in this process and in net job creation.”

In its study on business dynamism, Brookings found of all the businesses that started from 1978-2008, more succeeded than not. But since 2009, that trend has reversed – more businesses fail today than succeed: 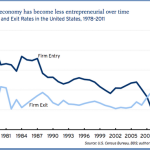 These reports seem to indicate a startling disconnect between Americans’ trust in small businesses and general understanding of how government policy impacts these businesses.

The Wall Street Reform and Consumer Protection Act of 2010 is only halfway implemented, but the impact has been devastating on small business. Take the story of Brad Schaeffer whose business involved natural gas derivatives. Schaeffer explained in the  Wall Street Journal the short-sightedness of the government trying to fix one problem has created a multitude more:

“The consequences of Dodd-Frank—the killing of small businesses, the incredible workload imposed on surviving firms, and the propping up of institutions that regulators hoped to diminish—show that Congress has an astonishingly limited understanding of the marketplace dynamics its 2,300-page behemoth attempts to control.”

Schaeffer himself eventually closed his small business and moved to a larger company he says is more equipped to withstand the regulatory onslaught of the new financial rules. But he laments the impact on his employees:

“When I closed my firm, I was lucky enough not to have to worry much for my personal future, but I am apprehensive about the world that awaits my former employees, most of whom have families.”

And then there’s the Affordable Care Act. A study by the National Center for Policy Analysis found small business owners across the country have already started taking drastic measures to comply with the law; more than four-in-ten have delayed hiring due to uncertainty about the effects of the ACA, while one in five reported cutting their staff.

Onerous and far-reaching policies enacted during the past five years illustrates that federal government has not  been neglecting small businesses, but giving these businesses too much of the wrong kind of government attention..

Job Creators Network CEO member and former Staples CEO Tom Stemberg summed up in the Boston Globe why this type of attention, while well-intended, only harms economic freedom:

“This is just the beginning of a difficult year for policymakers, as they attempt to explain why small business owners have to pick up the check for healthcare reform. These entrepreneurs just want what they’ve been promised by their leaders: a fair chance to succeed, and a shot at the American Dream.”

With nearly 80,000 pages of government regulations in 2013 alone, it is no wonder businesses across the country have trouble…