The President is releasing a budget proposal for the upcoming year that USA Today reports “will include about $74 billion more in “discretionary investments” than would be allowed under sequestration in 2016, about a 7% increase over those caps.”

In other words, the spending plan would include some immediate budget relief in the next year or two. But beyond? A much different story – both debt and deficit would spiral to unprecedented levels.

With the U.S. Debt currently more than $18 trillion and counting, Job Creators Network is concerned about piling more spending on a budget that is already unsustainable. And new data from the Congressional Budget Office (CBO) shows that concern is well-founded.

For further information, the Campaign to Fix the Debt has compiled and presented the new CBO outlook of the nation’s fiscal health over the next ten years:

Highlights of the CBO Budget and Economic Outlook 2015-2025 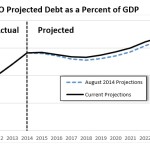