Businesses Brace for Health Care Price Tag, So Should Families

Many businesses across the country are still in limbo while politicians and government bureaucrats try to figure out just how and when all of the rules of the Affordable Care Act will finally take shape.

According to a new survey though, most employers are already planning for changes to their staff, employee benefits and the way they do business just to comply with the rules of the new federal health care law.

The International Foundation surveyed nearly 700 employers, large and small, who provide health plans to their employees. While very few say they’ll discontinue health coverage altogether, most believe the ACA has had a negative impact on their company.

One alarming finding in this survey is that smaller employers are getting hit much harder than larger ones. This should be of utmost concern to employers, employees and their families. The Small Business Administration notes there are 23 million small businesses in America, which provide 55 percent of all jobs and 66 percent of net new jobs since the 1970’s.

The costs of the Affordable Care Act could put the brakes on much of this economic growth by removing some of the economic freedom small businesses have enjoyed on the way to creating those eight million jobs.

This chart tells us how employers are already cutting hours, benefits and jobs in response to the ACA with the most drastic cuts by businesses with fewer than 50 employees. That 50 employee threshold is important as businesses that keep their staffing under 50 full-timers will not face a $2,000 per-worker penalty they would otherwise have to pay for not providing health coverage to full-time staff: 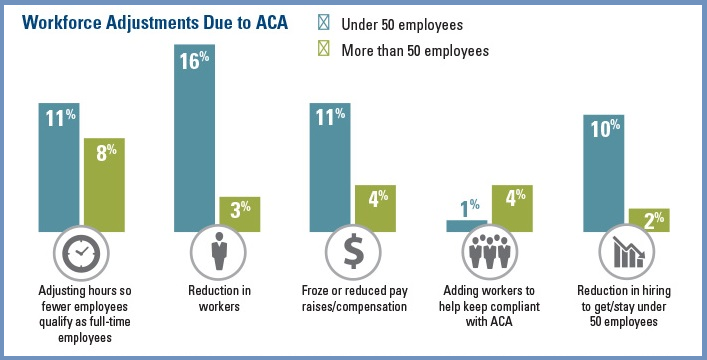 Employers are also taking “cost-containment measures” with the health benefits they offer their employees. This means more out-of-pocket limits, higher deductibles and co-pays, and many other methods to keep ACA-related business costs to a minimum:

But what does all of this mean for the pocketbooks of employees and their families? And employers who have to make these tough decisions that impact their workers?

In a study entitled “The Effects of the Affordable Care Act on Small Business,” the National Center for Policy Analysis looked at the government’s own numbers which say required coverage under the Affordable Care Act will cost an individual “the equivalent of an additional $3 an hour ‘minimum health wage.’ Family coverage could cost more than twice that amount.”

Those numbers come from the Congressional Budget Office. The NCPA also tells us that an estimated six-in-ten Americans who have private health coverage get that coverage through an employer.

That’s a lot of money. And it doesn’t even start to scratch the surface of the other penalties and taxes that employers are looking at if they don’t comply with the ACA:

“Employers are also required to limit the amount of premiums most employees pay to a percentage of their wage income. For example, health plans are considered “unaffordable” if workers earning less than 400 percent of the federal poverty level (about $46,680 for an individual) must pay a premium that is more than 9.5 percent of their income. Firms that fail to provide health insurance will be subject to a tax penalty of $2,000 for each e uninsured employee beyond the first 30.  Firms that offer “unaffordable” coverage will pay a penalty of $3,000 for each worker who cannot afford coverage.”

The original problems with the health care system have long been an inability to control costs and the transfer of people’s control of their own health care dollars to bureaucrats. When government policies do nothing to solve these original problems and only add more people to an already severely broken system, businesses suffer and in turn, so do hard working American taxpayers and their families.

Priceless? Or Penniless in Seattle